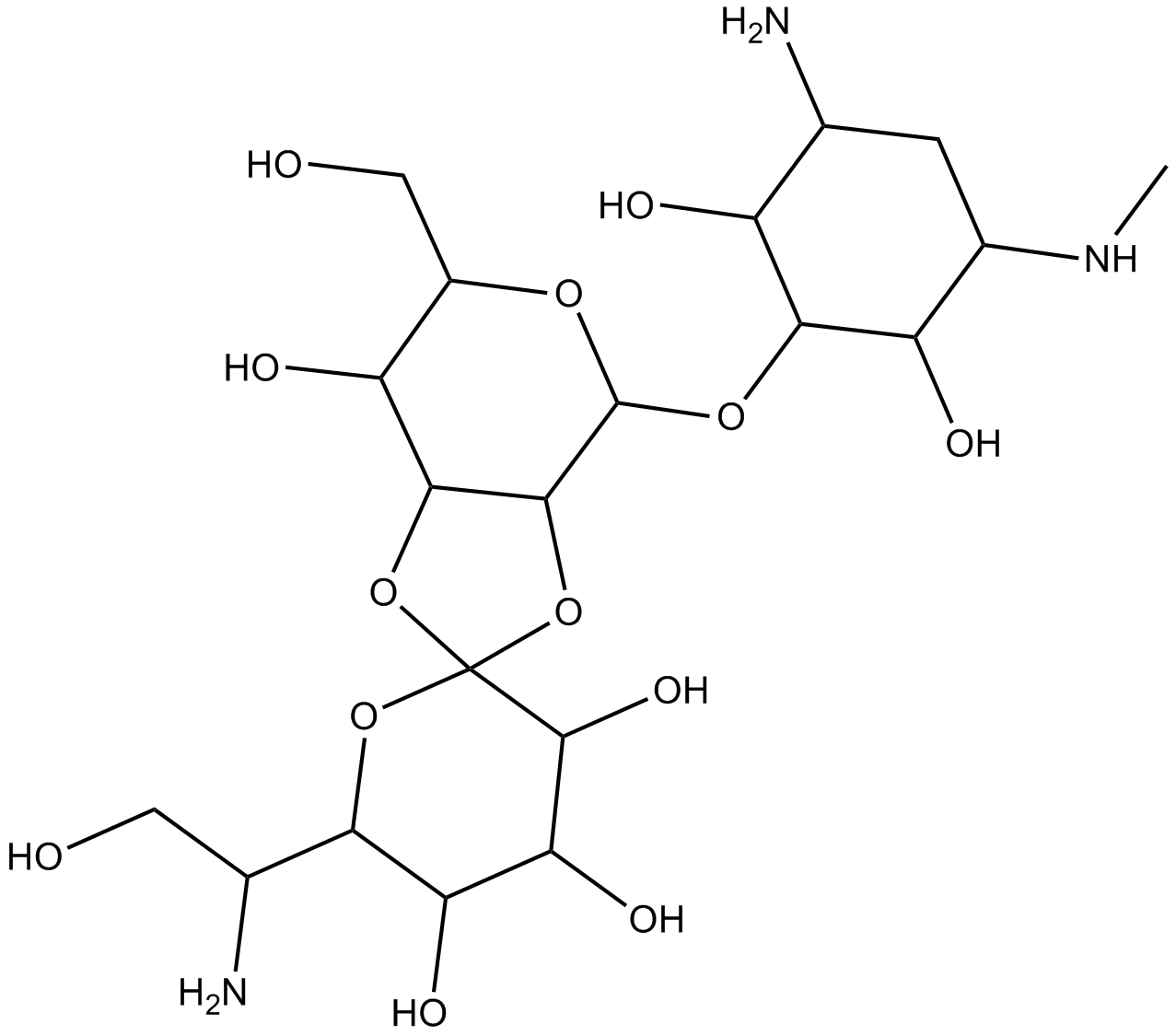 Hygromycin B is an aminoglycoside antibiotic produced by Streptomyces hygroscopicus. Widely used in veterinary medicine and in cell culture selections, it kills bacteria, fungi, and higher eukaryotic cells, including mammalian cells [1].

The sensitivity of various cultured cell lines to Hygromycin B was assessed by plating cells at low density in Dulbecco modified Eagle medium supplemented with 10% fetal calf serum and Hygromycin B to give final drug concentrations ranging between 50 and 400 ug/ml of medium. Usually one or two cycles of replication still occurred before the onset of cytotoxicity; cell death commenced ca.3 days after the beginning of drug treatment and was generally complete after 8days (CV1 and HeLa cells sometimes required 10 to 12 days before cell killing was complete). Sofar, no cellline has been found that is naturally resistant to Hygromycin B [2].

Hygromycin B provides a generally applicable selection system for DNA transfer experiments between both procaryotic and eukaryotic cells [2].

Exploration of Hygromycin B Biosynthesis Utilizing CRISPR-Cas9-Associated Base Editing

Hygromycin B is an aminoglycoside antibiotic widely used in industry and biological research. However, most of its biosynthetic pathway has not been completely identified due to the immense difficulty in genetic manipulation of the producing strain. To address this problem, we developed an efficient system that combines clustered regularly interspaced short palindromic repeats (CRISPR)-Cas9-associated base editing and site-specific recombination instead of conventional double-crossover-based homologous recombination. This strategy was successfully applied to the in vivo inactivation of five candidate genes involved in the biosynthesis of hygromycin B by generating stop codons or mutating conserved residues within the encoding region. The results revealed that HygJ, HygL, and HygD are responsible for successive dehydrogenation, transamination, and transglycosylation of nucleoside diphosphate (NDP)-heptose. Notably, HygY acts as an unusual radical S-adenosylmethionine (SAM)-dependent epimerase for hydroxyl carbons, and HygM serves as a versatile methyltransferase in multiple parallel metabolic networks. Based on in vivo and in vitro evidence, the biosynthetic pathway for hygromycin B is proposed.

Objectives: To determine the effect of sea salt on the resistance of Trichoderma harzianum LZDX-32-08 to hygromycin B and speculate the possible mechanisms involved via transcriptome analysis.
Results: Sea salt addition in media to simulate marine environment significantly increased the tolerance of marine-derived fungus Trichoderma harzianum LZDX-32-08 to hygromycin B from 40 to 500 ¦̧/ml. Meanwhile, sea salt addition also elicited the hygromycin B resistance of 5 other marine or terrestrial fungi. Transcriptomic analyses of T. harzianum cultivated on PDA, PDA supplemented with sea salt and PDA with both sea salt and hygromycin B revealed that genes coding for P-type ATPases, multidrug resistance related transporters and acetyltransferases were up-regulated, while genes coding for Ca2+/H+ antiporter and 1,3-glucosidase were down-regulated, indicating probable increased efflux and inactivation of hygromycin B as well as enhanced biofilm formation, which could jointly contribute to the drug resistance.
Conclusions: Marine environment or high ion concentration in the environment could be an importance inducer for antifungal resistance. Possible mechanisms and related key genes were proposed for understanding the molecular basis and overcoming this resistance.