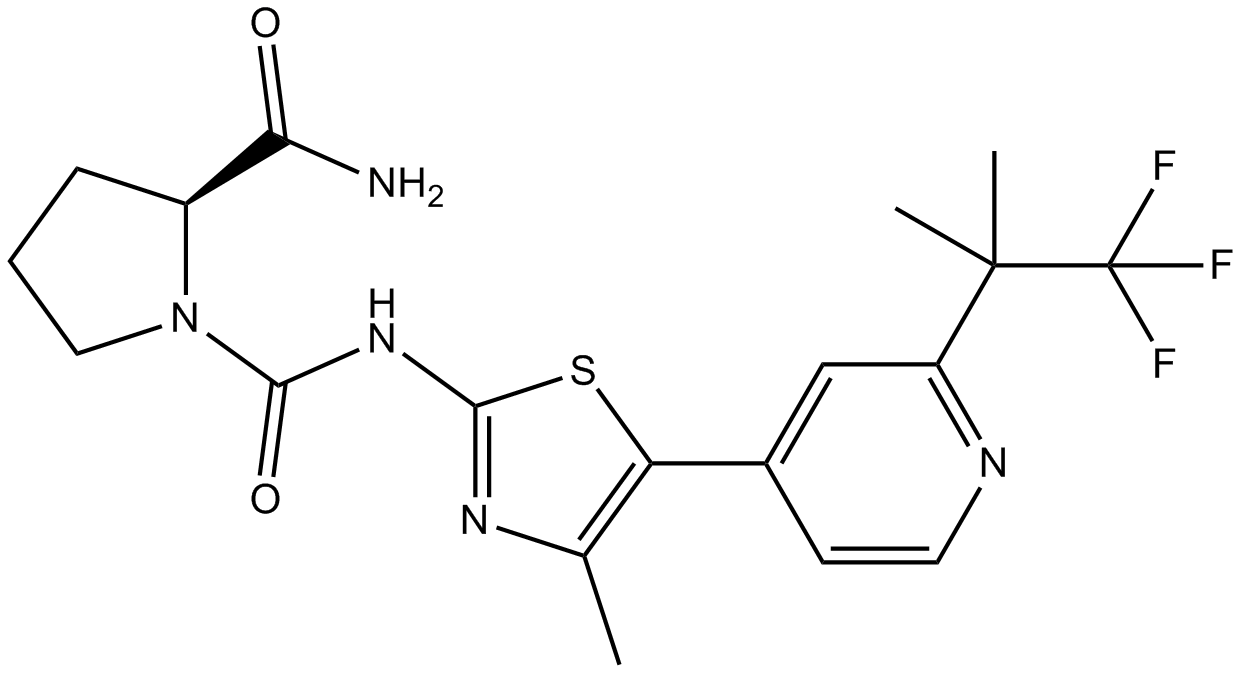 Oral consumption of BYL-719 results in dose-dependent hyperglycemia and hyperinsulinemia. Littermates were block-randomised to receive either the diet containing either 0.3 g/kg BYL-719. Following 6 weeks of treatment higher fed blood glucose and plasma insulin levels were evident in the BYL-719 treated groups, and a trend towards decreased body weight was seen with BYL-719 treatment without a difference in food intake. We have previously shown that p110α inhibitors can prevent weight gain in young (4–5 weeks old) mice during development[3].

BYL-719 reduces obesity and elevates energy expenditure in mice.The most dramatic on-target effect of BYL-719 was hyperglycemia, which in the case of the ob/ob mice was severe due to their diabetic condition.However, it is important to note that in normal lean mice, the glycemia induced by PI3Kɑ inhibition is within physiological range [4].

Rhabdomyosarcoma (RMS) is a highly malignant and metastatic pediatric cancer arising from skeletal muscle myogenic progenitors. Recent studies have shown an important role for AKT signaling in RMS progression. Aberrant activation of the PI3K/AKT axis is one of the most frequent events occurring in human cancers and serves to disconnect the control of cell growth, survival, and metabolism from exogenous growth stimuli. In the study reported here, a panel of five compounds targeting the catalytic subunits of the four class I PI3K isoforms (p110α, BYL-719 inhibitor; p110β, TGX-221 inhibitor; p110γ, CZC24832; p110δ, CAL-101 inhibitor) and the dual p110α/p110δ, AZD8835 inhibitor, were tested on the RMS cell lines RD, A204, and SJCRH30. Cytotoxicity, cell cycle, apoptosis, and the activation of downstream targets were analyzed. Of the individual inhibitors, BYL-719 demonstrated the most anti-tumorgenic properties. BYL-719 treatment resulted in G1/G0 phase cell cycle arrest and apoptosis. When combined with CAL-101, BYL-719 decreased cell viability and induced apoptosis in a synergistic manner, equaling or surpassing results achieved with AZD8835. In conclusion, our findings indicate that BYL-719, either alone or in combination with the p110δ inhibitor, CAL-101, could represent an efficient treatment for human rhabdomyosarcoma presenting with aberrant upregulation of the PI3K signaling pathway.

Purpose: Activation of the phosphoinositide 3-kinase (PI3K) pathway is an important resistance mechanism to anti-HER2 therapies. This study aimed to assess the safety and activity of alpelisib (a PI3Kα isoform-specific inhibitor) with T-DM1 in trastuzumab- and taxane-resistant HER2-positive MBC.
Methods: Patients with HER2-positive MBC that had progressed on trastuzumab-based therapy were treated with alpelisib daily and T-DM1 3.6 mg/kg every 3 weeks. The dose-limiting toxicity (DLT), maximum tolerated dose (MTD), adverse events, overall response rate (ORR), and clinical benefit rate (CBR = CR + PR + SD > 6 months) were assessed with descriptive statistics. Progression-free survival (PFS) was calculated by the Kaplan-Meier method.
Results: Seventeen patients were enrolled with a median of 3 prior therapies for metastatic disease. The DLT was a maculopapular rash and MTD was 250 mg alpelisib daily. The most frequently occurring toxicities included fatigue, rash, gastrointestinal side effects, thrombocytopenia, anemia, elevated liver enzymes, and hyperglycemia. Fourteen patients were evaluable for response with an ORR of 43%. In patients with prior treatment and progression on T-DM1 (n = 10), the ORR was 30%. The CBR was 71% in evaluable patients and 60% in those with prior T-DM1. The median PFS was 8.1 months.
Conclusions: The combination of alpelisib and T-DM1 is tolerable and demonstrates activity in trastuzumab-resistant HER2-positive MBC. Furthermore, activity was observed in T-DM1-resistant disease. These data suggest that PIK3CA inhibition targets an important resistance pathway to anti-HER2 therapy, providing rationale for further study of PI3K inhibition in refractory HER2-positive MBC to validate these results.

Phosphoinositide 3-kinases (PI3Ks) are lipid kinases essential for growth and metabolism. Their aberrant activation is associated with many types of cancers. Here we used single-particle cryoelectron microscopy (cryo-EM) to determine three distinct conformations of full-length PI3Kα (p110α-p85α): the unliganded heterodimer PI3Kα, PI3Kα bound to the p110α-specific inhibitor BYL-719, and PI3Kα exposed to an activating phosphopeptide. The cryo-EM structures of unbound and of BYL-719-bound PI3Kα are in general accord with published crystal structures. Local deviations are presented and discussed. BYL-719 stabilizes the structure of PI3Kα, but three regions of low-resolution extra density remain and are provisionally assigned to the cSH2, BH, and SH3 domains of p85. One of the extra density regions is in contact with the kinase domain blocking access to the catalytic site. This conformational change indicates that the effects of BYL-719 on PI3Kα activity extend beyond competition with adenosine triphosphate (ATP). In unliganded PI3Kα, the DFG motif occurs in the "in" and "out" positions. In BYL-719-bound PI3Kα, only the DFG-in position, corresponding to the active conformation of the kinase, was observed. The phosphopeptide-bound structure of PI3Kα is composed of a stable core resolved at 3.8 Å. It contains all p110α domains except the adaptor-binding domain (ABD). The p85α domains, linked to the core through the ABD, are no longer resolved, implying that the phosphopeptide activates PI3Kα by fully releasing the niSH2 domain from binding to p110α. The structures presented here show the basal form of the full-length PI3Kα dimer and document conformational changes related to the activated and inhibited states.

Introduction: Breast cancer is the leading cause of cancer death in women. The aromatase inhibitors (AIs), Anastrozole (Ana), Letrozole (Let), and Exemestane (Exe) are a first-line treatment option for estrogen receptor-positive (ER+) breast tumors, in postmenopausal women. Nevertheless, the development of acquired resistance to this therapy is a major drawback. The involvement of PI3K in resistance, through activation of the PI3K/AKT/mTOR survival pathway or through a cytoprotective autophagic process, is widely described.
Materials and methods: The involvement of autophagy in response to Ana and Let treatments and the effects of the combination of BYL-719, a PI3K inhibitor, with AIs were explored in AI-resistant breast cancer cell lines (LTEDaro, AnaR, LetR, and ExeR).
Results: We demonstrate that Ana and Let treatments do not promote autophagy in resistant breast cancer cells, contrary to Exe. Moreover, the combinations of BYL-719 with AIs decrease cell viability by different mechanisms by nonsteroidal vs. steroidal AIs. The combination of BYL-719 with Ana or Let induced cell cycle arrest while the combination with Exe promoted cell cycle arrest and apoptosis. In addition, BYL-719 decreased AnaR, LetR, and ExeR cell viability in a dose- and time-dependent manner, being more effective in the ExeR cell line. This decrease was further exacerbated by ICI 182,780.
Conclusion: These results corroborate the lack of cross-resistance between AIs verified in the clinic, excluding autophagy as a mechanism of resistance to Ana or Let and supporting the ongoing clinical trials combining BYL-719 with AIs.